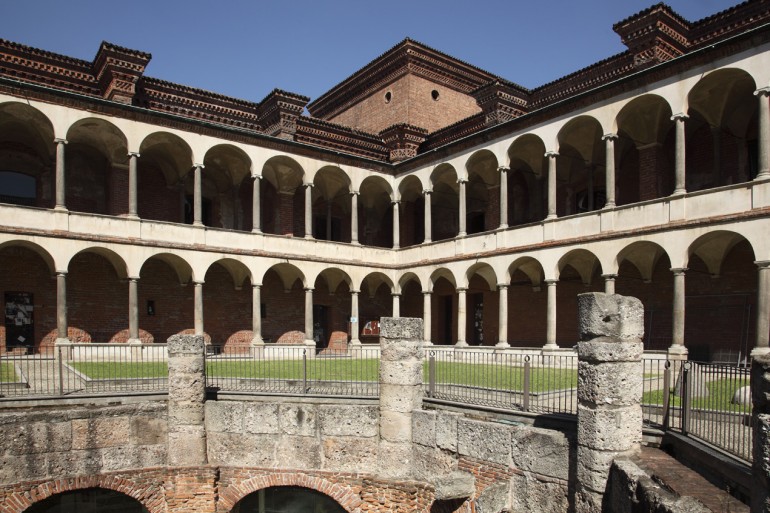 Not unlike its twin – aka the ‘ice-house’ – the Woodshed Courtyard was the work of Lombardy craftsmen who sought inspiration from Filarete’s project and worked on it staring from 1486. While it was originally known as the “women’s courtyard” because it was reserved to female patients, by the 18th century it had come to be known as the “nizuola courtyard” probably because of the presence of a hazel tree, nisciœula being the Milanese word for “nut.” Successively it was renamed after the kitchens located along the eastern side. It was only starting from the second-half of the 18th century that we find reference to a “woodshed,” located within the perimeter of the courtyard and surviving until 1943. Wood was previously stored in the main courtyard, behind the tiny church and attached burial ground.

Archaeological digs carried out by the Università degli Studi in 1995 brought to light a large quantity of bones and animal horns, most likely the waste from the hospital’s slaughterhouse (built in 1494) or, more simply, from the kitchens or attached dispensary. It is likely this part of the edifice also hosted a panateram pristini, or bakery (built in 1478), a chicken coop and a pigsty (first mentioned in 1499) as well as a livestock slaughterhouse (existing since 1500). The practice of butchering livestock in the hospital, in fact, started from that date.

Within the central octagonal structure there once was a well having a diameter of 2 metres. It is not sure whether it was a surface well, from which water was drawn, or an underground sewerage well. A surface well for kitchen use, on the other hand, already existed in the north-western corner, made by Guglielmo del Conte in 1482.